In remote and isolated areas of the world, where mobile phones and landlines are unavailable, satellite communications are the only solution. The situation is similar in the event of natural or man-made disasters, when various telecommunications services are rendered unusable. Satellite PTT transceivers are the answer in both cases, allowing instant two-way communication anywhere, anytime. Read more...

• The Icom IC-SAT100 is the world’s first dedicated satellite push-to-talk (PTT) radio and is the only PTT radio offering real-time communications at the push of a button between groups of individuals, each of whom can be anywhere on the planet* (* Depending on the country or region, carrying and/or use of the IC-SAT100 may be prohibited)
• SATELLITE PTT (Push-To-Talk) is a two-way radio system using the Iridium® satellite network. It can be used to communicate in remote isolated areas where there is no cellular or fixed line infrastructure.
• 15 talkgroup (maximum)
• Powerful 1500 mW audio output
• Built in GPS
• Bluetooth capability
• Confirms with IP67 standard (waterproof and dust-tight)
• Equivalent to MIL-STD 810 C, D, E and F requirements
•Supplied accessories: complete charger, 2200mAh Li-ion battery, antenna, AC cable, belt clip
• Multiple subscription options, please contact us.

The product is ordered directly from the manufacturer's headquarters in Germany. The lead time is approximately 2-3 weeks if the product is in stock, otherwise it is subject to confirmation by the manufacturer.
Gross price (including 27% VAT): 1,598.85€ (Net price: 1,258.94€)

The product is ordered directly from the manufacturer's headquarters in Germany. The lead time is approximately 2-3 weeks if the product is in stock, otherwise it is subject to confirmation by the manufacturer.
Gross price (including 27% VAT): 3,797.08€ (Net price: 2,989.83€) 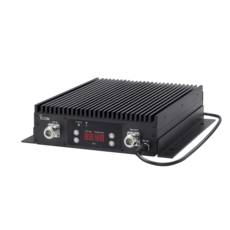 The product is ordered directly from the manufacturer's headquarters in Germany. The lead time is approximately 2-3 weeks if the product is in stock, otherwise it is subject to confirmation by the manufacturer.
Gross price (including 27% VAT): 8,121.32€ (Net price: 6,394.74€)

Satellite phones, as their name suggests, work in a similar way to traditional mobile phones. This means that you can dial stored numbers to make calls to people you know and love. Satellite transceivers, on the other hand, communicate instantly with all the radios in the same speech group. It's as simple as pressing a single button, so no dialling is required at all.

How does satellite PTT work?

The way a satellite push-to-talk transceiver works is basically the same as any other similar device. So no special training is required to use it. The two-way communication itself is made possible by the Iridium satellite network: 66 satellites covering the entire planet, including the two poles (which is why the satellite phone is often referred to as an Iridium phone). Low Earth orbit (LEO) satellites allow better connectivity, less attenuation and shorter signal propagation times than geosynchronous Earth orbit (GEO) satellites.

Icom, based in Japan, needs little introduction to radio enthusiasts. The company has always placed a strong emphasis on innovation, so it's hardly surprising that they launched the world's first dedicated satellite transceiver (PTT) radio. With the IC-SAT100, communication anywhere in the world is possible with the push of a button.

The device can be used to create up to 15 talk groups, and the 1500 mW speaker ensures clear and intelligible sound. As the satellite phone is typically used in harsh environments, the manufacturer has also taken care to ensure dust and water resistance (IP67 standard). The built-in GPS also allows you to track your current position on the display, while the integrated Bluetooth allows you to use the radio while driving.

● Emergency call at the touch of a button

● AquaQuake function to remove water from the speaker

To use your satellite phone, you need two types of subscription: Airtime and Talk Group. Airtime is most similar to a mobile phone subscription, and each radio requires a separate Airtime subscription. Talk Group is a fee calculated on the basis of the territorial coverage and is payable regardless of the number of radios.

Advanced solutions from the experts: contact DND Telecom Center if you are looking to buy a satellite phone or have further questions!