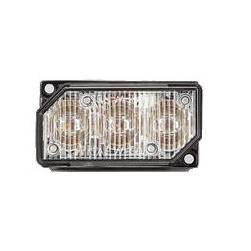 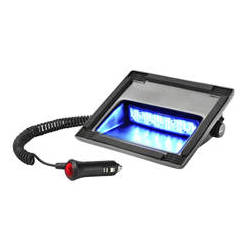 The blue perimeter lighting is not in itself a substitute for the primary stable lightbar or mobile beacon light, as the name suggests, but only a complement. Nowadays, we almost only see LED designs. Perimeter lighting are generally fixed, with the exception of windscreen indicators, which may be suction-cup, adhesive or Velcro.

The Hungarian standard specifies that the blue perimeter light may be used in conjunction with the primary signal. When installing it, the specifications and the rules for its operation must be taken into account. The purpose of the perimeter lamp is to increase the visibility of the vehicle using the emergency sign.

The blue perimeter light signal may be used for 12 to 24 V DC systems, depending on the type of vehicle. The perimeter flasher is also available in red, amber or white, which in certain circumstances provide improved visibility. The placing on the market of these blue supplementary lights requires compliance with the R65 and R10 standards, which cover colour co-ordination and electromagnetic compatibility. The latter ensures that the device is adapted to and does not interfere with the vehicle's electrical system. Typical applications for blue and red perimeter light signals are trucks, special vehicles and large vehicles. Today, a multicolour LED module is also available, which means that 2 to 3 or 4 colours can be displayed within the light box. This design allows the vehicle using the differentiating mark to give a warning signal if necessary or to provide area illumination by switching on the white light.

The pattern of the perimeter light often includes pre-programmed timings that can be selected by the user or installer, taking into account the country's regulations.

Manufacturers use different headlamp lenses and mirrors to increase the light output and offer different mounting methods (screw, adhesive or auxiliary bracket), but in most cases car-specific mounting brackets must be produced. For the combined control of more than two lamps, synchronisation options are provided with the possibility to set different flashing effects. They can even be integrated into the vehicle's headlamp so that these additional flashing devices can be used discreetly without anyone noticing that it is a vehicle using a covert differentiation.

Taking into account the customer's requirements, there are many ways of fitting the perimeter light flasher, such as behind the engine grille, behind the windscreen (also known as windshield lights), behind the rear and side windows, on the rear-view mirror, in the door, on the door sill or on the boot.