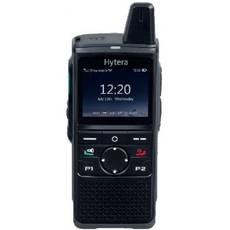 Traditional transceivers, however advanced, operate over the VHF frequency bands, meaning that their range is inherently limited. PoC (Push-To-Talk Over Cellular) devices, on the other hand, use the internet to communicate - this can be a mobile or WiFi network. This is why PoC radios are also known on the market as network radios, IP transceivers, 4G radios, LTE transceivers.

When you want to cover large areas, even whole counties or an entire country, the cost of traditional radio solutions can skyrocket. With PoC radios, there is no need for repeater stations, as they use the existing infrastructure operated by the mobile operators. These versatile and modern radios can therefore be used anywhere where 3G or 4G coverage is available, and can even work with wireless connectivity (WiFi).

As there is no need to build and maintain a complex repeater network, PoC radios are very cost-effective, especially as they can be used anywhere in Europe or worldwide with the right subscription. There are three types of charges for a PoC radio: the cost of the equipment, the cost of the GSM subscription and the cost of the PoC server service. Depending on the manufacturer and the plan chosen, these can be purchased as a lump sum or separately. Depending on the brand of the device, some devices come with a SIM card provided by the manufacturer and built-in, but some manufacturers also offer the option for the user to use their own GSM SIM card.

PoC radios are based on the "push-to-talk" principle. So there's no need for any radio test or training - they're easy to use for anyone with a mobile phone. They can be set up immediately after purchase. Many models also allow for one-handed use, which is useful for field work or office activities. PoC radios provide excellent sound quality and are also suitable for individual and group calls. PoC (Push to Talk over Cellular) radios are GSM-based transceiver radios that provide instant group communication at the touch of a button with traditional GSM network coverage.

Depending on the device, a PoC radio can offer a range of extra features to help you communicate. These include Bluetooth connectivity, which allows you to connect headphones or an external microphone to the radio. Dust and water resistance can be a similarly useful feature, as these radios are often used in the field and in harsh conditions.

Programmable channels and memorizable contacts speed up the connection process considerably, and some models can also provide full-duplex communication (transmitter and receiver at the same time, like a GSM phone). The "man down" function ensures safety at work: it sends an alarm if the user falls or collapses, and does not cancel the alarm. The "lone worker" function is useful for people working alone, because it sends an alarm after a set time period has elapsed.

Who are PoC radios recommended for?

PoC radios are extremely popular with transport workers. Whether it is passenger or freight transport, communication at national or even European level is essential. The same is true for asset protection, where, for example, a PoC radio can provide communication for cash-in-transit vehicles. These devices are highly recommended for rescue and fire brigade associations, but companies interested in agriculture should also consider setting up a PoC system.

We offer a wide range of quality equipment and expert advice - check out our webshop!