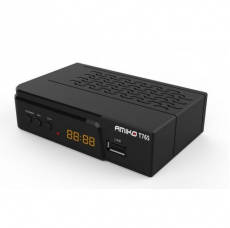 A set-top box, also known as an indoor unit or decoder, is an essential accessory for any television set that is not capable of receiving digital broadcasting, whether terrestrial digital, cable or satellite, including MindigTV, MindigTV Premium, Digi Cable TV or T-home Cable TV.

A set-top box is essentially a signal converter that connects the TV set to the receiving device and converts the encoded broadcasts and signals into a format suitable for the set. To choose the right indoor TV set-top box for you, you need to know which one is suitable for receiving what kind of broadcast and converting the signal.

DVB-T and DVB-T2 set-top boxes are mostly suitable for free-to-air TV reception. For terrestrial digital free-to-air broadcasting, this standard has been introduced in Hungary. Among others, the MindigTV and MindigTV Premium services fall into this category. DVB-T2, the more advanced version of the DVB-T standard, will be adopted in Hungary in 2020. On devices supporting DVB-T and DVB-T2, support is indicated by a separate logo.

Our outdoor and indoor antennas for terrestrial digital TV reception are in the TV antenna category.

Indoor satellite reception units use the DVB-S and DVB-S2 standards, which are suitable for decoding broadcasts, mostly pay or otherwise encoded. In Hungary, the DVB-S standard has been introduced for satellite broadcasting, with DVB-S2 being an improved version.

In the case of cable transmission, the signal is usually transmitted via a TV aerial coaxial cable to a set-top box or TV set equipped with a DVB-C tuner.

Many indoor units have more than one tuner. This means, for example, that a set-top box with DVB-S2 and DVB-T2/C tuners can receive both satellite, terrestrial and cable broadcasts.

Advantages of a set-top box

The main advantage of set-top boxes, in addition to satellite, terrestrial or cable reception, is that they are available with a wide range of functions, so that they can even give your TV set the features of a Smart TV, including:

Browse our set-top box range and don't hesitate to contact us if you need expert help!