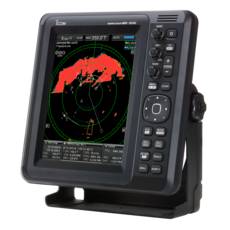 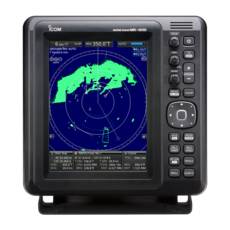 Gross price (including 27% VAT): 3,597.92€ (Net price: 2,833.01€)
Add to Cart Price Watch
You can ask for e-mail price notifications when the price of this product gets under a limit you specify. To use this feature you need to have a user account and to be signed in.

• Simplified ARPA (Automatic Radar Plotting Aids) Function: the simplified ARPA function helps to prevent a collision risk with other vessels or objects. Up to five targets can be automatically tracked on the radar echo, when a target enters within the set watch area, (or up to ten targets can be tracked when manually set). By selecting one of the targets, the target information such as position, course, speed, CPA, TCPA, bearing, and distance is shown on the lower side of the display. When the target enters within the CPA and TCPA limits, an alarm message is displayed with a beep alarm

• DSC (Digital Selective Calling) Information Function: when connected to a DSC radio and a DSC call is received, the received message is transferred to the MR-1010RII. Up to 20 DSC messages can be plotted on the radar echo. If a MOB position information is transmitted from a DSC handheld transceiver (including Icom IC-M94D), the MR-1010RII can show the MOB waypoint on the radar echo to assist in search and rescue operation

• AIS (Automatic Identification System) Overlay Function: When connected to an external AIS device (including Icom IC-M605, IC-M510 AIS and, IC-M506 AIS), up to 100 AIS target icons are overlaid on the radar echo. By selecting an AIS icon, vessel information such as AIS class, MMSI number, vessel name, course, speed, CPA, TCPA, bearing and distance are shown on the lower side of the display

• Optional Video Output Unit: With an optional video output unit, UX-252, the MR-1010RII can be connected to an external display. Same radar echoes can be observed on the main unit and external display at the same time

• TLL (Target Latitude Longitude) Function: the MR-1010RII can mark points with icons and transfer the position data with NMEA TLL sentences to other NMEA 0183 devices such as an external plotter

Gross price (including 27% VAT): 213.25€ (Net price: 167.92€)
The product is ordered directly from the manufacturer's headquarters in Germany.
Details Add to Cart

Gross price (including 27% VAT): 234.45€ (Net price: 184.61€)
The product is ordered directly from the manufacturer's headquarters in Germany.
Details Add to Cart